Jewish Budapest Now and Then 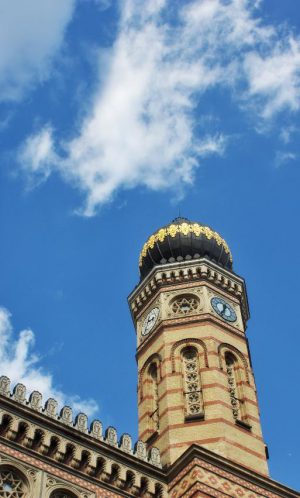 On this half-day walking tour you’ll visit places in Budapest you’d never see without a knowledgeable guide. The Jewish Quarter of Budapest, between Rákóczi út and Andrássy út, is best known for the Great Synagogue – the largest synagogue in Europe and the second largest in the world.

There is much to see in this densely populated district that was largely Jewish before World War II. You’ll learn about the area’s history as you take in the atmosphere of the area that is now home to Budapest’s alternative scene. Your private guide is an expert on the Jewish heritage of the city and will show you places in the city that even most locals don’t know about, such as the ruins of the medieval city walls hidden in local residences.

Apart from hearing about Jewish history and seeing the monuments, you’ll also see the nearby palace quarter, and walk along Budapest’s Broadway. Your guide can also show you the most beautiful Art Nouveau buildings, taking you back in time to the beginning of the 19th century. You can stop at pubs located in the famous ruins, see unique market halls, visit designer shops featuring Hungarian creations, or visit some of the district’s charming galleries.

Book your tour at golocal@underguide.com